This quick and easy Tortellini Pasta Salad is packed with fresh Mediterranean -inspired flavors. You can whip this up in less than 20 minutes and it will be the star of any BBQ or potluck this summer!

Seriously! Don’t you just love cheese tortellini? I just love any food that is stuffed with other food. It’s like a little surprise in every bite. It’s just so much fun! I know what you are probably thinking… somebody really needs to get a life. 🙂

Galway, Ireland is a medieval town situated on the scenic route of the Wild Atlantic Way on the west coast of Ireland.

Galway is also known as “City of Tribes” because of the fourteen merchant families known as the  “tribes of Galway” dating back to the early 13th century. The most prominent family was the Lynch family. The Lynch castle is still standing today and is now used as a bank.

This area of Galway is known as The Latin Quarter. Brightly colored shops, pubs, and restaurants line the cobblestone roads. We spent three days in Galway and really fell in love with this city.

Music is such a huge part of the Irish culture it is not surprising that there are street entertainers everywhere.

If you like to enjoy a pint or two, there are no shortages of pubs to choose from. We definitely enjoyed a few while we were there.

In the heart of Galway is a popular park known as Eyre Square, also known as John F Kennedy Memorial Park. A great spot to sit and relax on a beautiful day. I know Ireland is known for raining a lot,  but other than our first day in Galway, we hardly had any rain at all in the two weeks we were there.

After a lot of sightseeing, we were starting to get a little hungry so we decided to stop into the pub An Púcán. Ireland is well known for having an abundance of amazing, fresh seafood so we decided on the fresh oysters and calamari, along with a cold beer. In my opinion, fresh seafood and a cold beer is a match made in heaven. This is what vacation is all about! 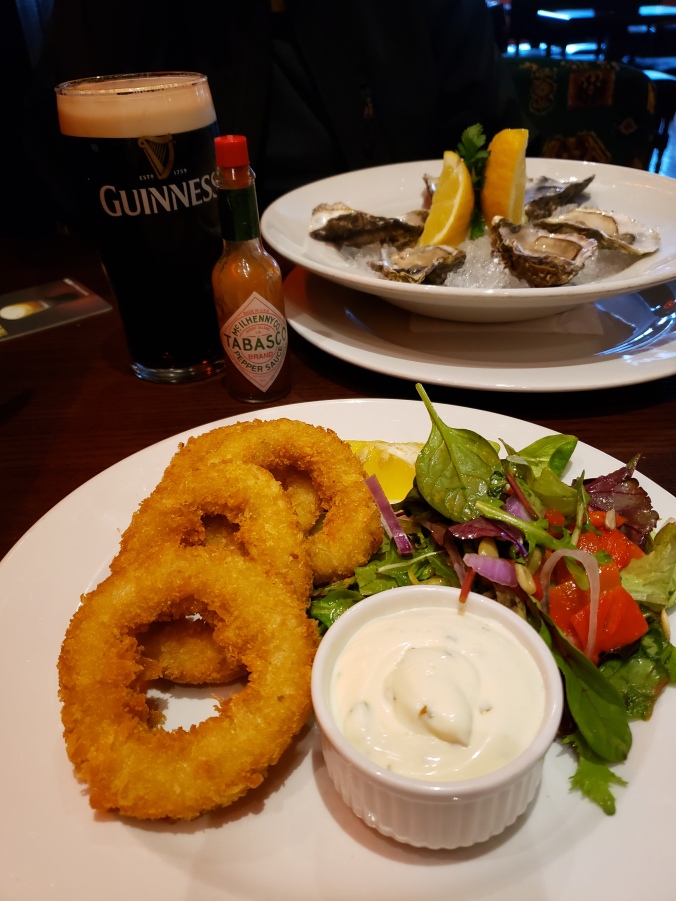 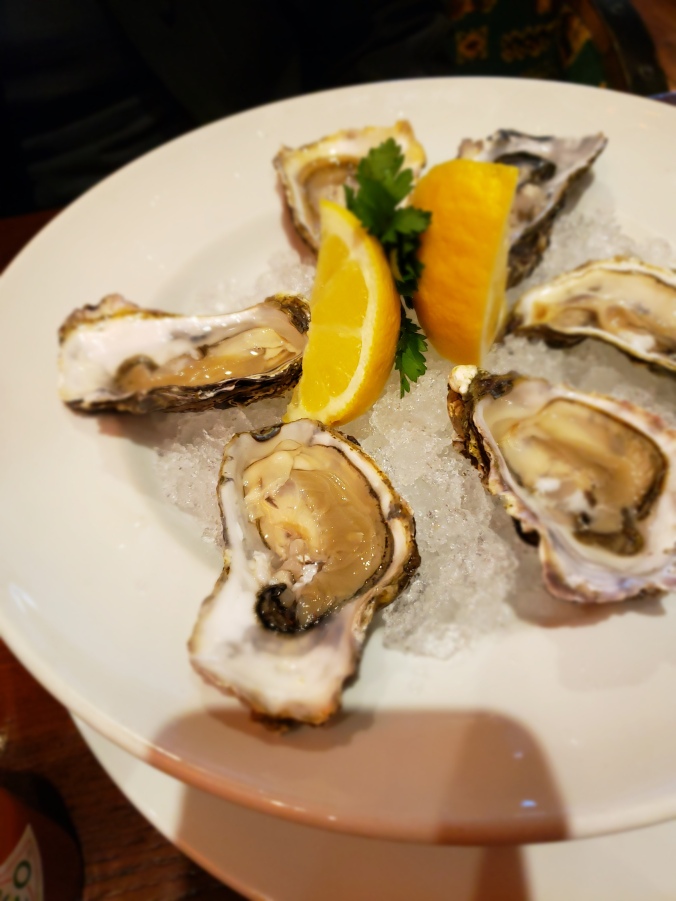 We enjoyed our visit to An Púcán so much we decided to return the following evening. They had an amazing band playing live music and we had so much “craic” (the Irish word for “fun”).

The Cliffs of Moher

We were sad to leave Galway but excited to finally get to see the Cliffs of Moher. We got to cross off a few things on our bucket list on this trip. The Cliffs of Moher is an absolute “must see”. The day we went was an extremely windy day, in fact, it was so windy that it was actually closed due to power outages in the area, and we were told to go “at your own risk”. Well, we had gone all the way out there, we couldn’t just turn around without seeing this majestic landscape. The wind was absolutely insane! I have never experienced anything like that. It was so windy we were actually having great difficulty walking and at one point I almost fell over. We were just hanging onto each other for dear life! It wasn’t as scary as it sounds because there is a barrier going around the edge to prevent people from blowing off the cliffs. The sheer beauty of the cliffs, as well as that crazy wind,  is a memory I will have forever. 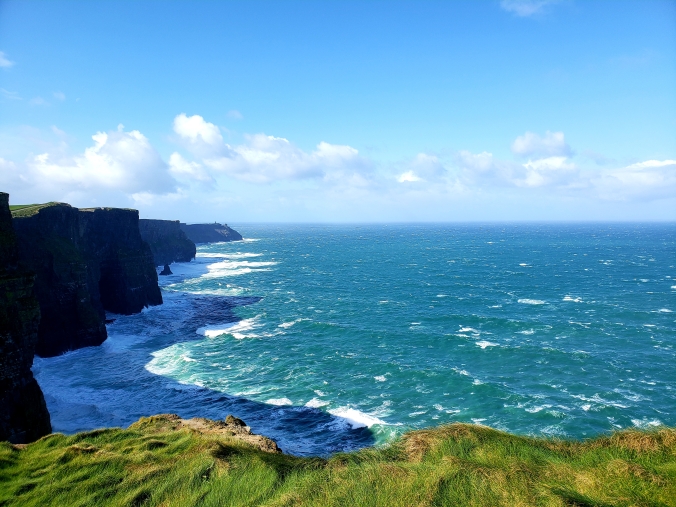 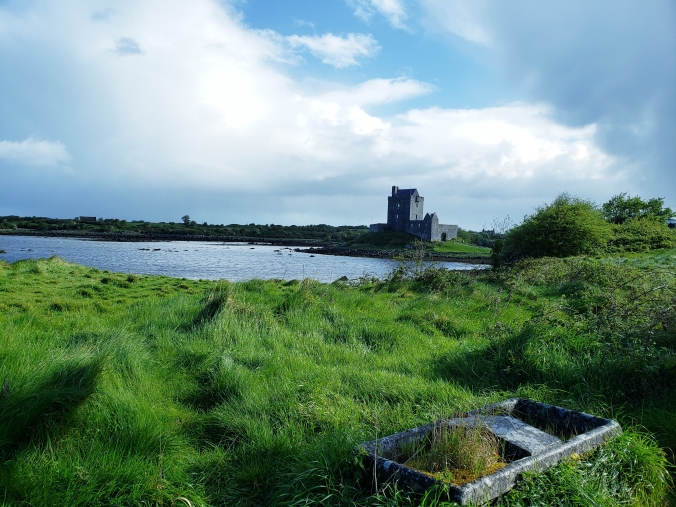 A Vietnamese-inspired Salad packed with vibrant fresh veggies and tossed with a sweet and tangy Carrot-Sesame Vinaigrette. Spring has SPRUNG, my friends.

Spring is finally here, and I couldn’t be happier! After a long, cold winter indulging on all of those heavy, rich and creamy comfort foods, it’s time to lighten things up. END_OF_DOCUMENT_TOKEN_TO_BE_REPLACED

Colcannon is a traditional Irish potato dish made with mashed potatoes, leafy greens such as cabbage or kale, leeks or green onions and plenty of good Irish butter. I served this with my Beef and Guinness Stew

Beef and Guinness Stew – A hearty stew slowly simmered for hours in a rich, deeply flavored broth until the beef is melt-in-your-mouth-tender. Guinness Stout Beer adds an incredible depth of flavor.

One of my all-time favorite meals is beef stew. It is so cozy and comforting, especially on a cold day. I never really make it the same way twice; sometimes I add red wine, sometimes I add Cognac. As St. Patrick’s Day is coming up, I thought it would be a great time to try Guinness Beer. Well, I have found my new favorite addition to beef stew!

Dark, malty, Guinness beer adds a deep, rich, complex flavor to a classic beef stew. Even if you are not a fan of beer, I think you will still really love this stew. I served this with  Colcannon

A hearty chicken soup that will warm your belly on a cold day. Rich and creamy, loaded with nutty wild rice, tender chunks of chicken and veggies – the PERFECT meal for a cold day, or any day for that matter!
END_OF_DOCUMENT_TOKEN_TO_BE_REPLACED